We’re at the airport 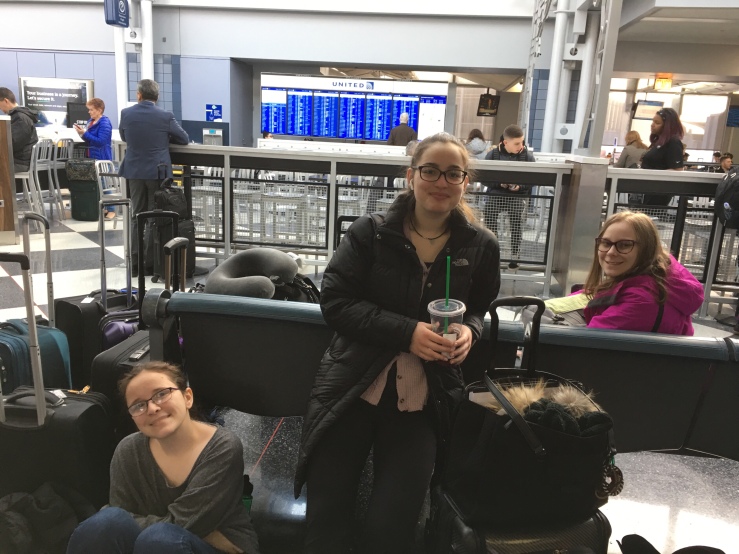 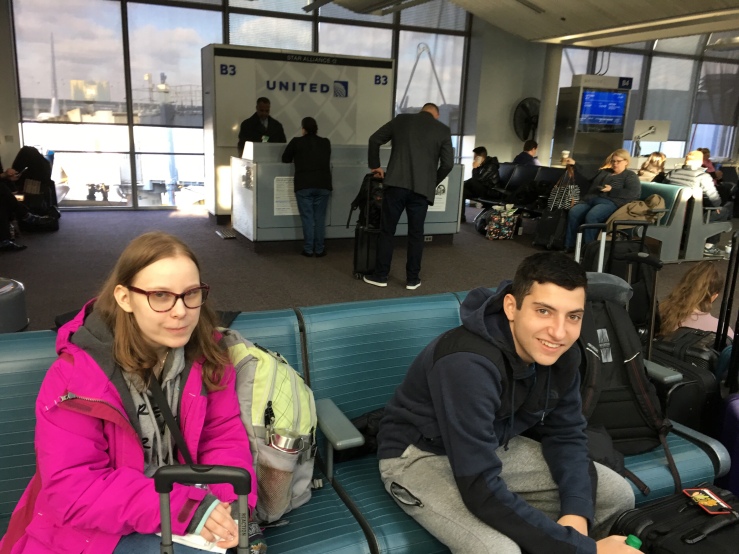 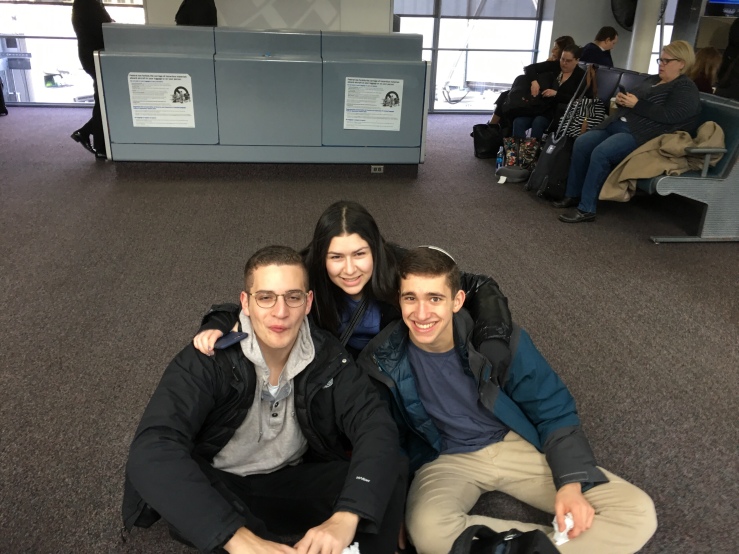 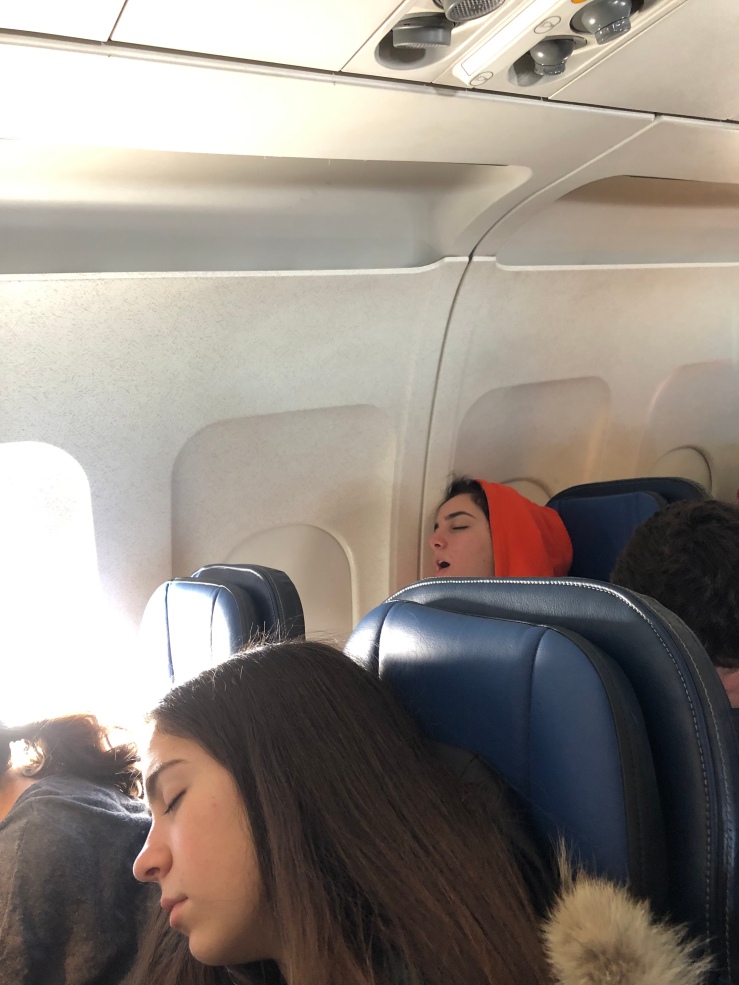 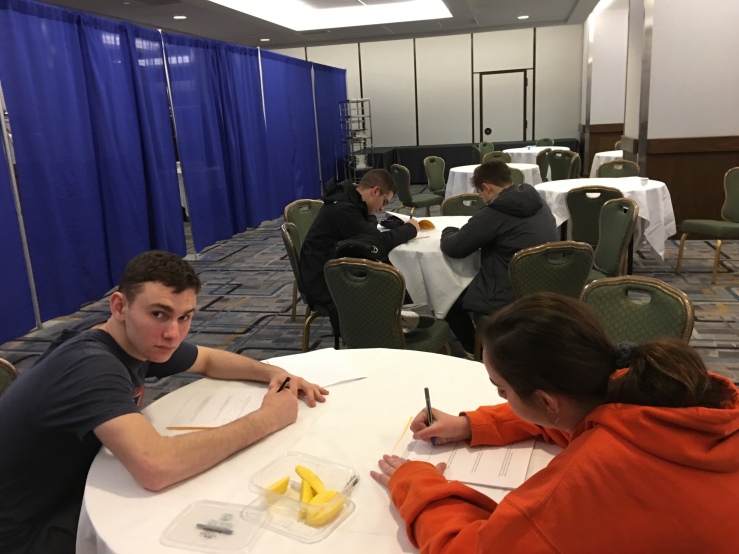 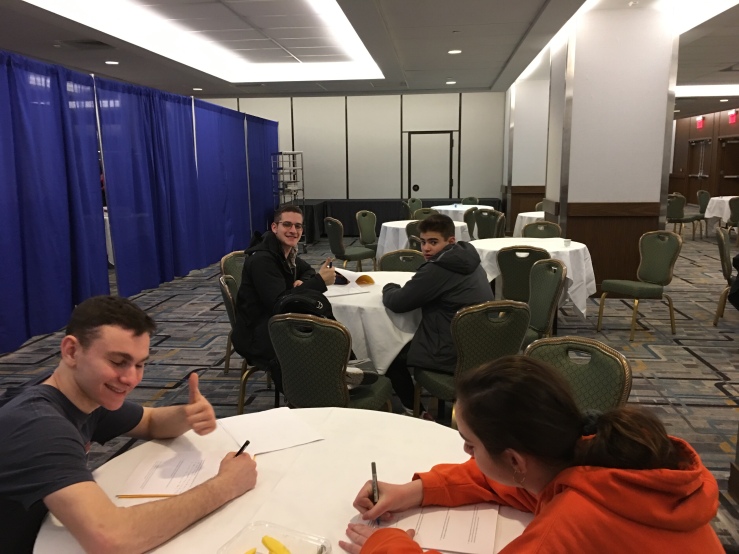 Mugging for the lobby Jumbotron 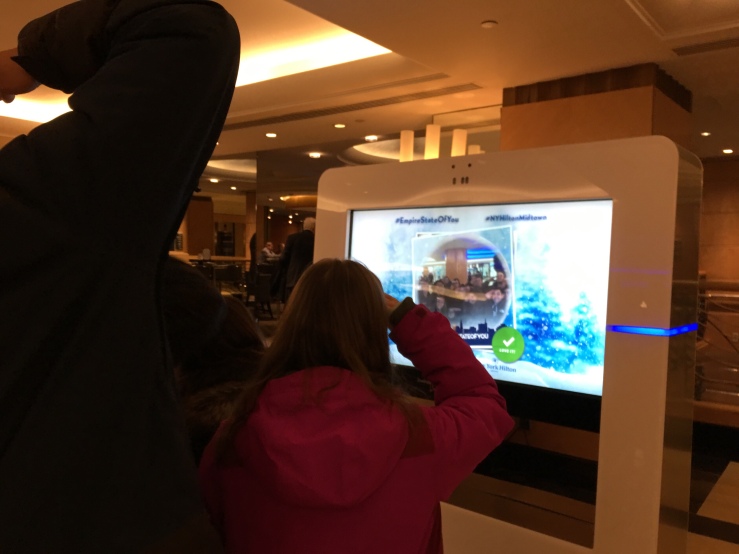 Shachar arrives in her chariot

On Broadway seeing “To Kill a Mockingbird”

Some of our students were able to get Jeff Daniels’ autograph! It was a memorable performance. 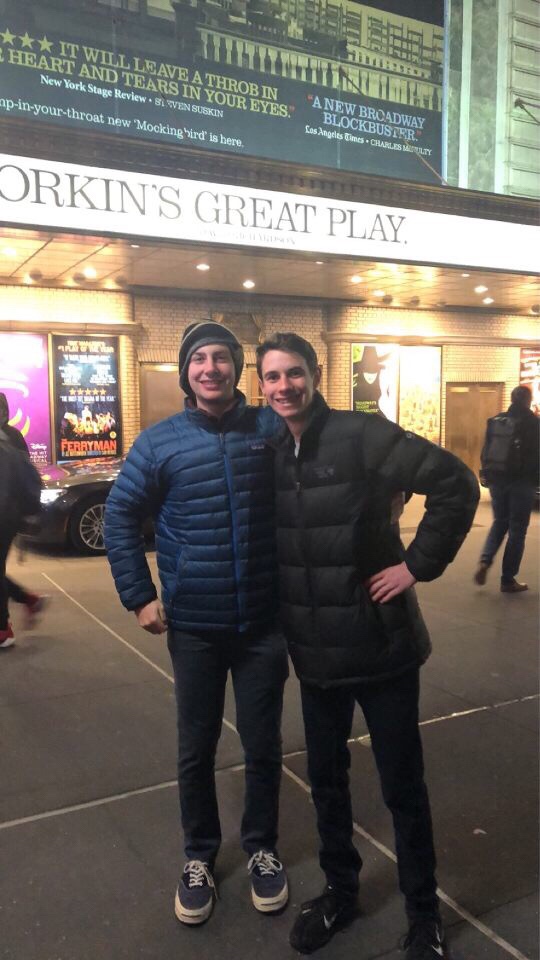 The delegates had a late start today with tefillah at 10:15, followed by bagels. We hopped on the subway down to SOHO for lunch and shopping. We ate at Mochaburger, where many of us had “impossible burgers “. This vegan item is a strategic choice as it allows one to have ice cream for dessert. Who says you can’t have your cake and eat it too?

The faculty hung out at a used bookstore 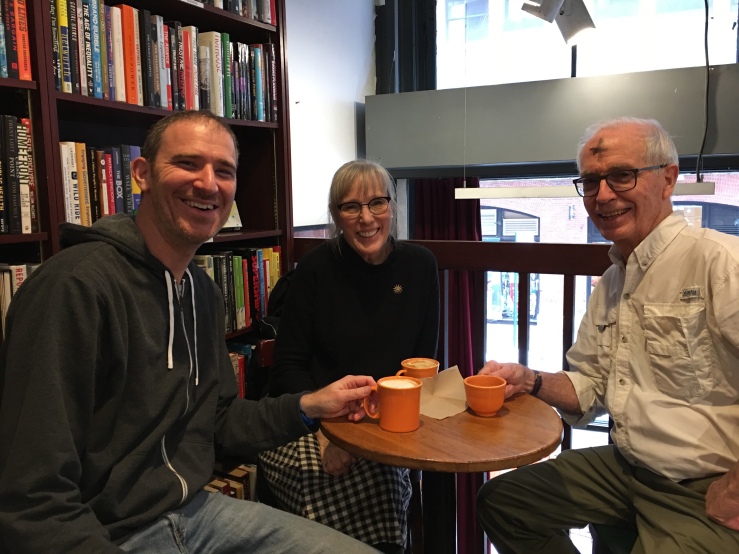 While the kids shopped

While taking the subway on a cold windy day 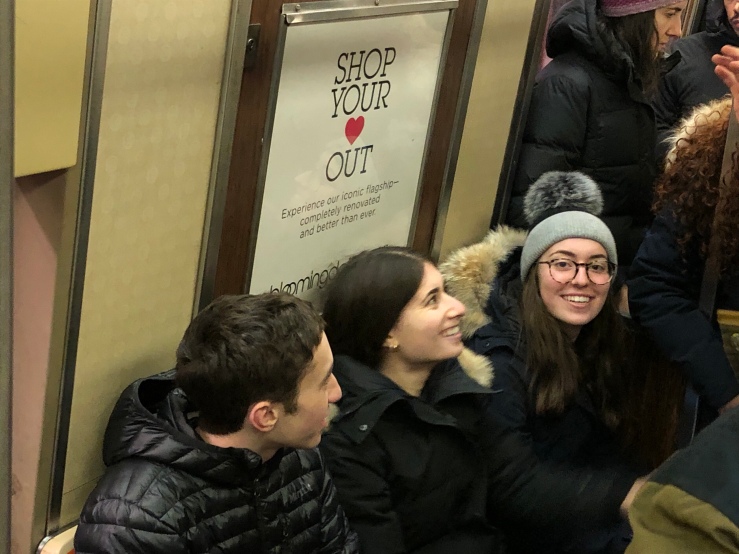 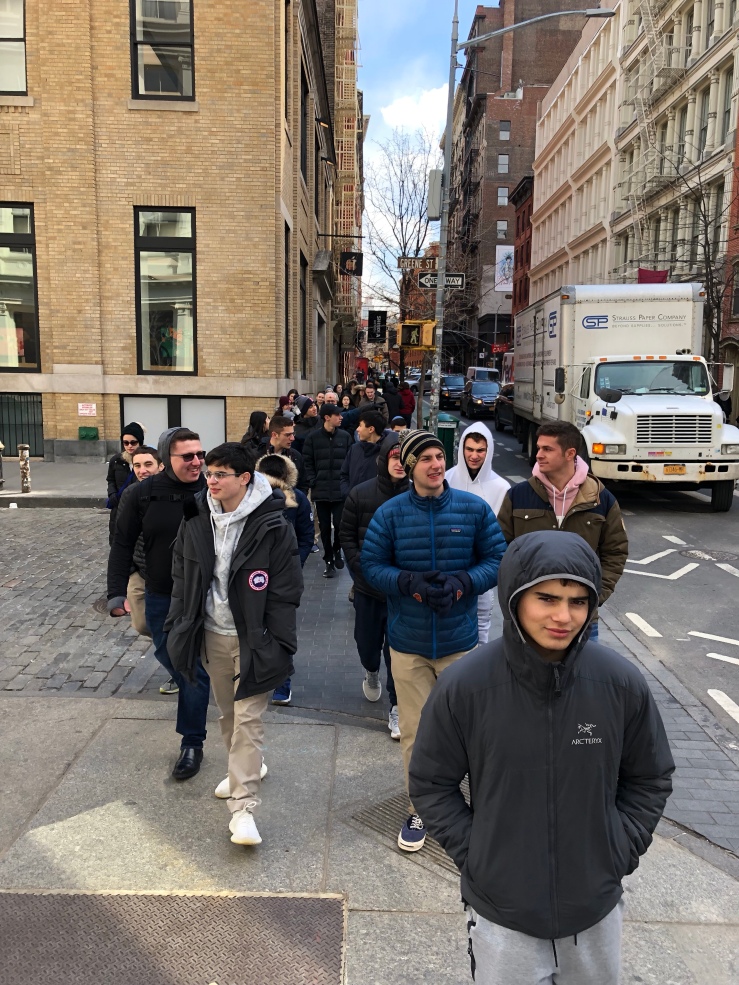 Back at the hotel spirits are high as preparation for the opening ceremony begins!😬

Rookies are ready with the guidance of the presidents

Freshmen are full of excited anticipation

Sophomores want to get in there and get started

Juniors are calm and confident 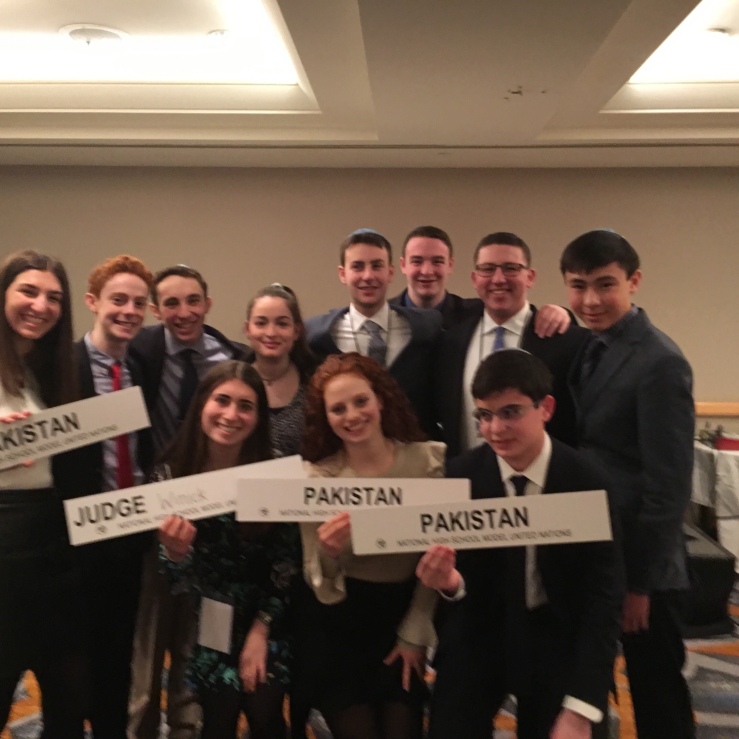 Ah, the Seniors! It’s bittersweet to see the excitement of the freshmen, knowing it’s their last conference together

The women of MUN are fierce

Don’t even think about messing with this woman!

And the MUN men are good looking

It’s all in the family

The presidents have confidence in their team

So let the games begin!

This morning the team went to the Pakistani consulate where we met with the under secretary of the Pakistani delegation to the UN. He gave us a brief history of the conflict with India, then took questions from our delegates. He candidly and graciously answered any and all questions, ranging from LGBQT rights to nuclear proliferation, to climate change. Our delegates were deeply engrossed in the conversation. 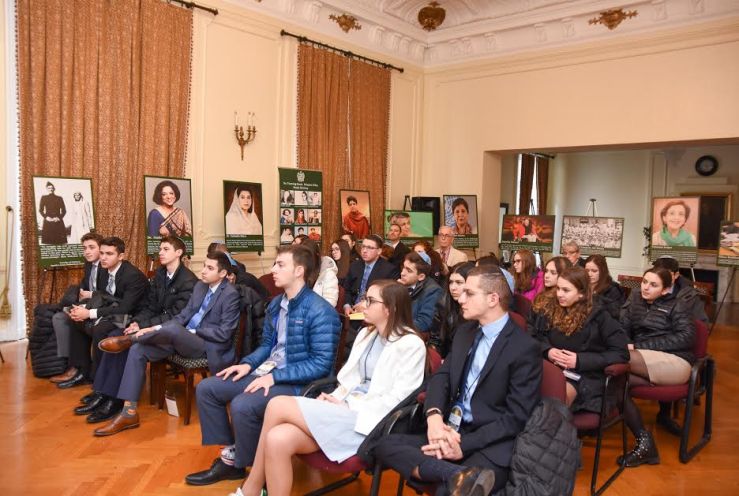 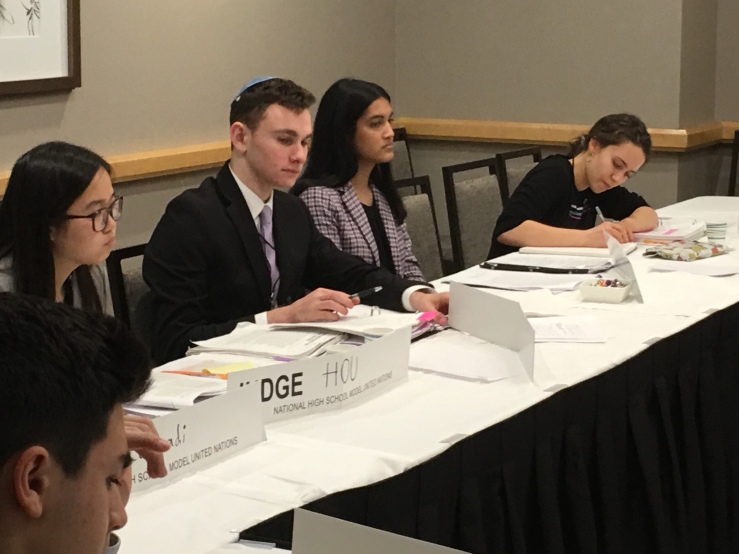 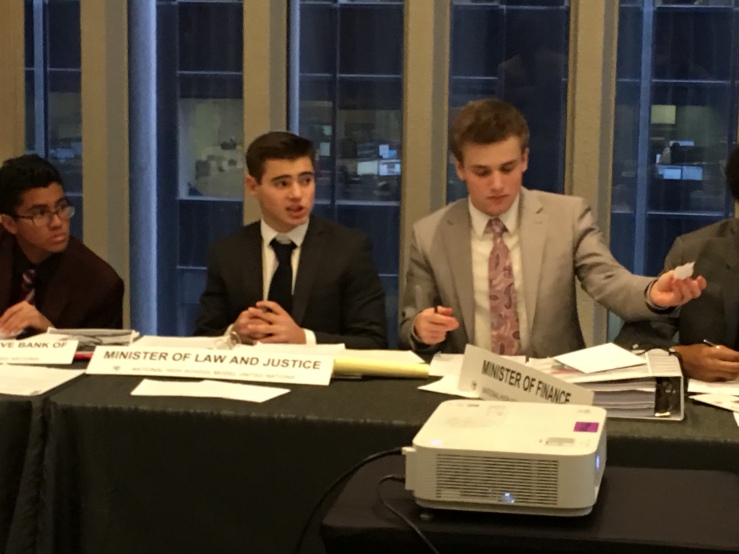 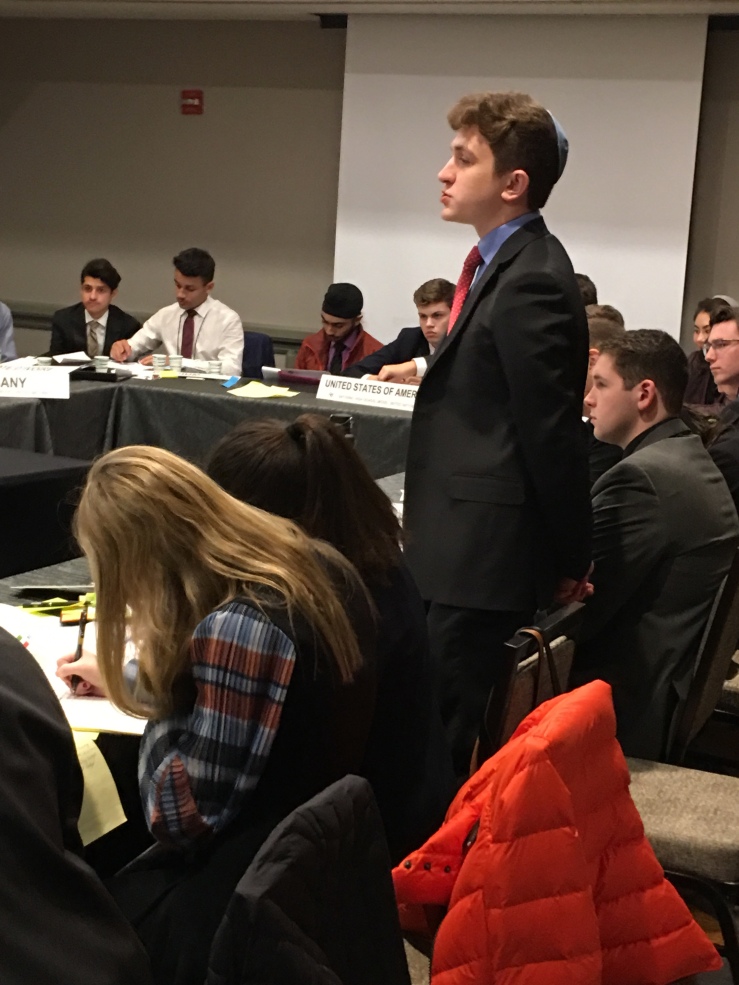 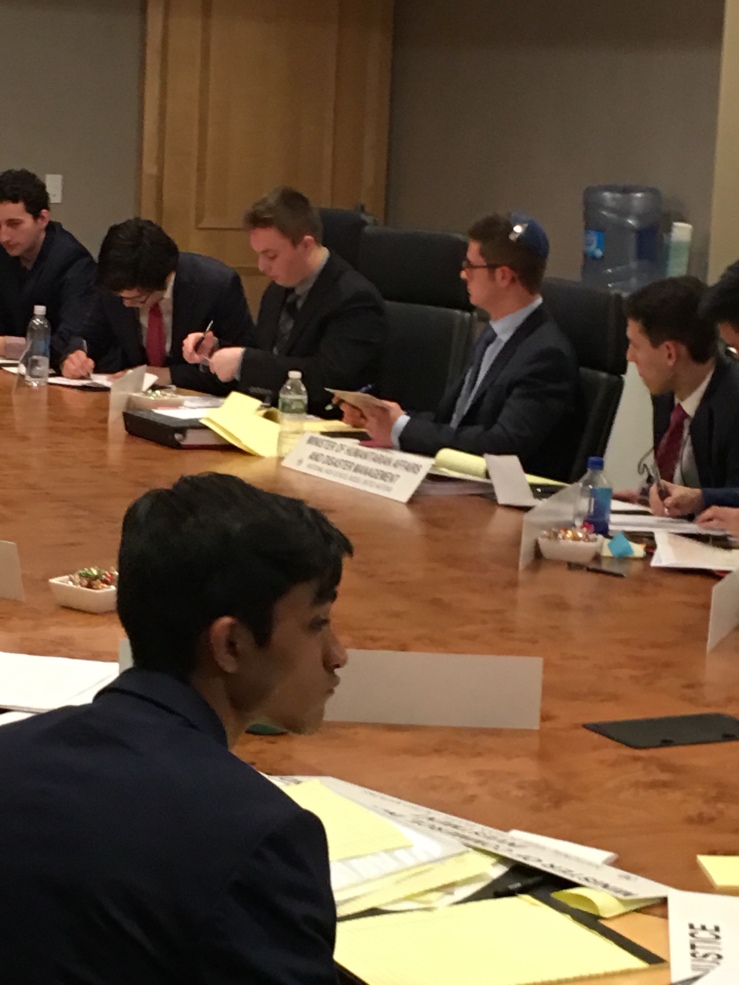 At the break the teachers slip out to Rockefeller Center 😯

Our crisis team members were called to emergency meetings late last night. After hours of anxious negotiations the crisis was averted, though at one point 500,000 troops were almost deployed! 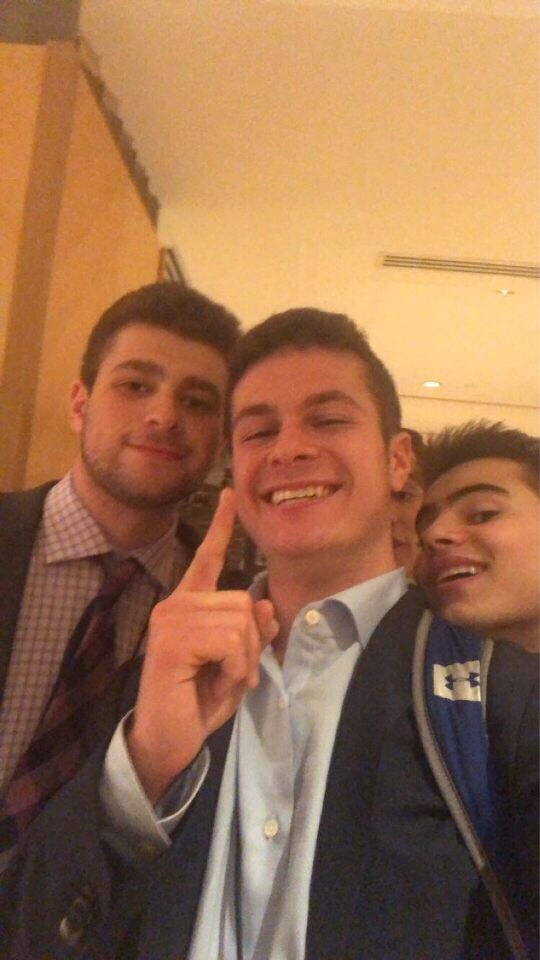 We begin each day with tefillah. Noam led today

Followed by New York bagels as big as a child’s head.

Back to work solving the world’s problems 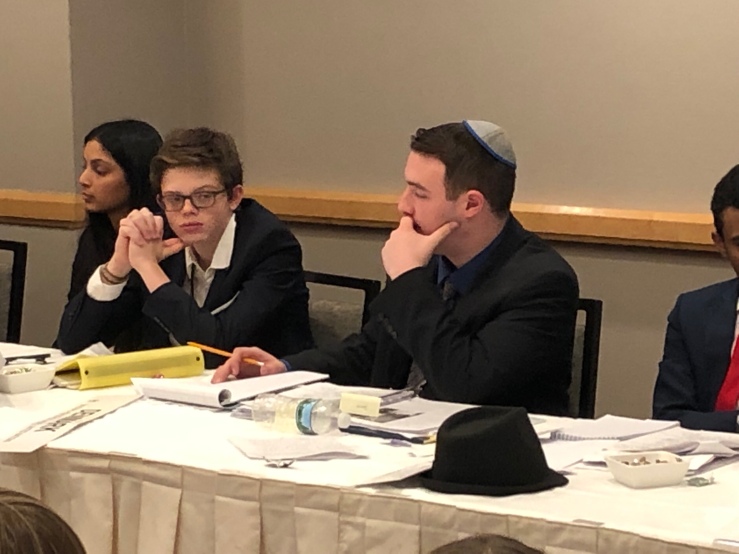 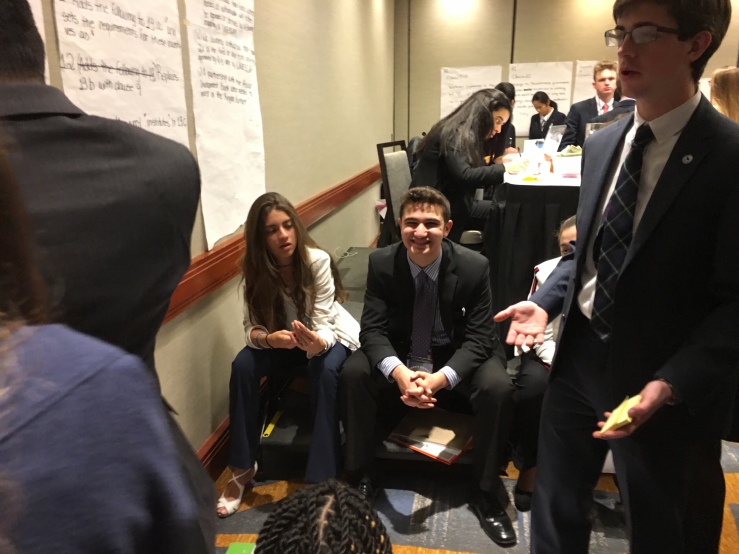 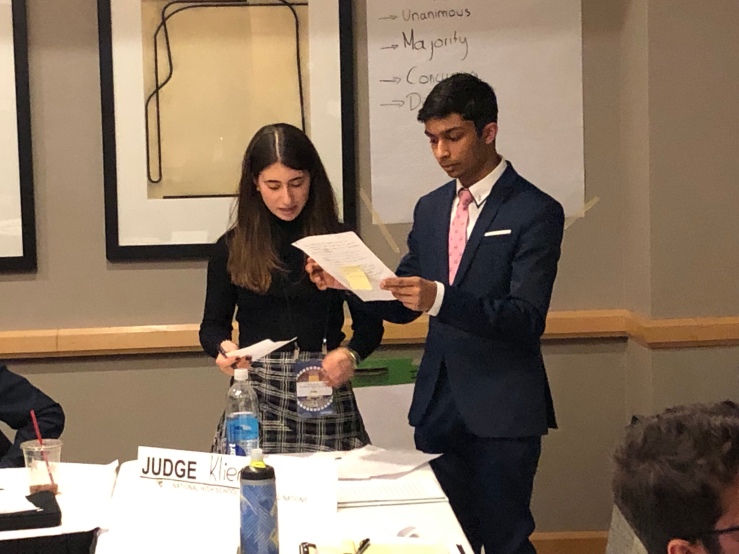 We celebrated Shabbat at the Or Olam Synagogue on 55th St with the Posner School, the only other Jewish day school competing in NHYSMUN.  The delegates were relieved to have finished the arduous work, but were anxious to hear the team standings.

BUT, by the end of the day we knew:

BEN LESCH got an Award of Distinction in Historical Crisis Committee!

AND, Brian Silverstein won an Award of Distinction in Crisis Committee!

AND, Jason Ross won an Award of Excellence in the International Atomic Energy Agency! 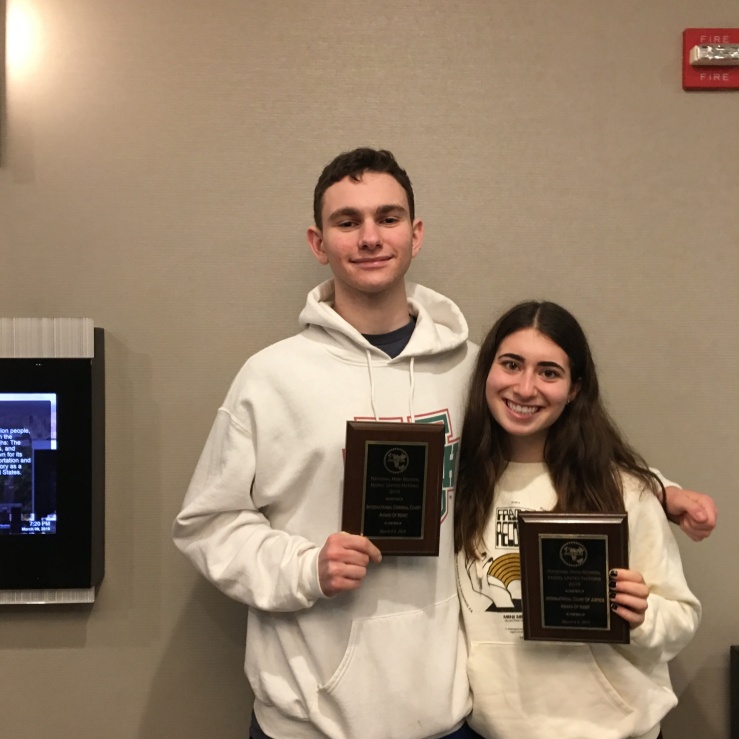 We also found out that the following folks were chosen to speak on behalf of their committees at the Plenary Session on Saturday morning at the UN!

Matt Weiss and Avital Strauss spoke for the World Bank

And, Nitzan Aaron spoke for the Council of European Union

We awoke with the dawn and left at 6:45 am to walk to the UN.  Spirits were high in spite of lack of sleep and nervous anticipation.

Being in the UN General Assembly room is like walking into history.  To see our students at that famous podium is a beautiful glimpse of the future. All of us cheered as our delegates approached the podium and we felt proud to represent our school.

After an interminable wait through the list of team awards of merit and excellence we held our collective breath until…. we were once again called to the podium to receive a team Award of Distinction for THE FIFTH TIME IN A ROW! 🎉🎉🎉🌟🌟🌟🇮🇱🇮🇱🎉🎉🎉🌟🌟🌟

KUDOS TO OUR PRESIDENTS and TEAM!!

It was back to Or Olam for services and lunch with the congregation and the team from Posner.

Students were eager to collapse into bed in a heap of weariness, like St. Bernard puppies. 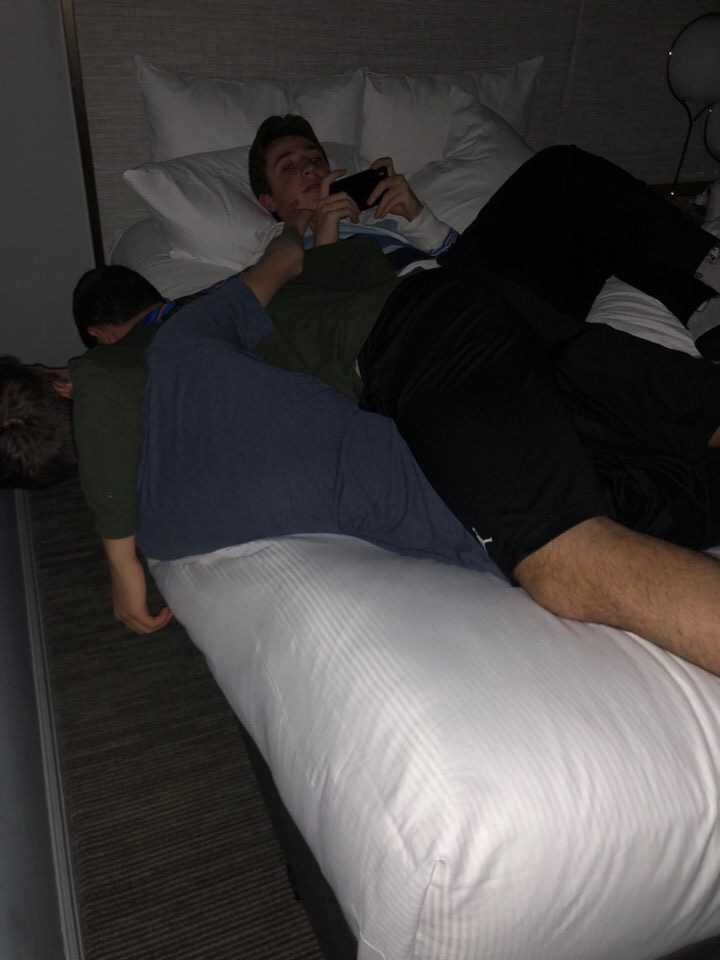 Followed by a trip to Times Square, an annual celabatory stroll, and a pizza party. 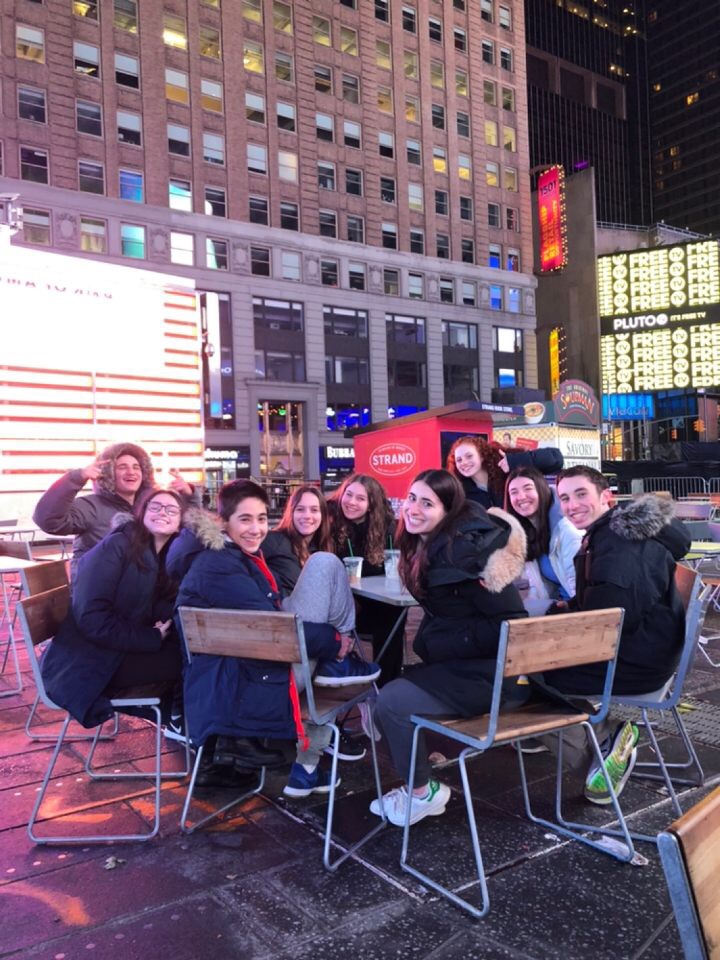 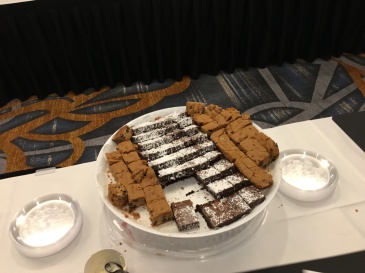 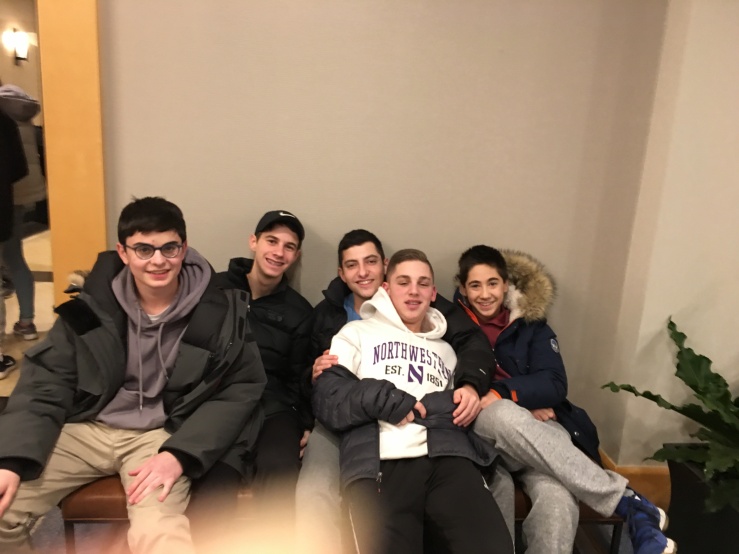 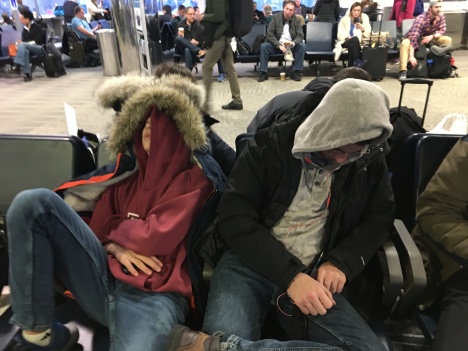 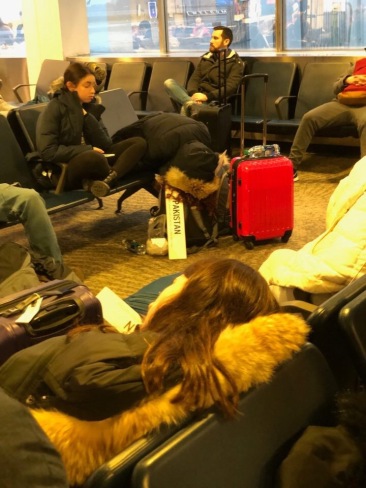 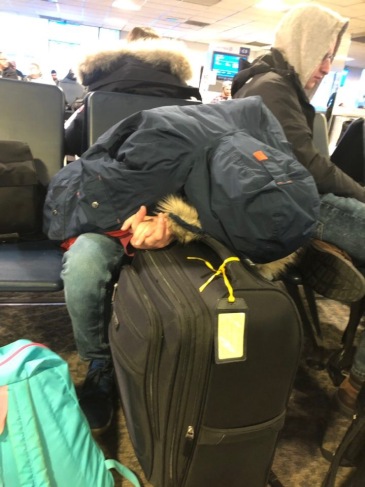 View all posts by rzjhsmunblog

This is a text widget, which allows you to add text or HTML to your sidebar. You can use them to display text, links, images, HTML, or a combination of these. Edit them in the Widget section of the Customizer.
%d bloggers like this: